Creating a way forward for our cruise community

More than a million Australians and New Zealanders took a cruise holiday each year before the global pandemic, helping to drive an industry worth more than $5 billion annually to our local economies.

With cruising suspended, billions of dollars have been lost and an estimated 25,000 jobs are at risk across Australia and New Zealand, including many in regional destinations and remote communities.

CLIA’s #WeAreCruise campaign tells the personal stories behind the many local businesses devastated by the cruise suspension and invites you to lend your support as we work towards a responsible resumption of cruising.

With extensive new health measures in place, now is the time for governments to agree on a way forward.

A way forward for Australia and New Zealand

CLIA is calling for a phased and carefully controlled resumption of domestic cruising in Australia and New Zealand, beginning with local cruises for locals only, underpinned by robust industry health protocols.

Now is the time for governments in Australia and New Zealand to agree on a responsible pathway to cruising’s resumption, so that businesses and communities throughout our region can plan for a much-needed tourism revival.

In Australia CLIA has outlined a four-phase pathway for a careful resumption of cruising in Australia, designed to align with government plans to revive tourism and reopen borders as the country transitions its Covid-19 response.

The cruise pathway has been developed in response to the four-phase National Plan agreed to by Australian governments, which sets out key stages of reopening and the national vaccination targets that trigger them.

Aligning the industry’s pathway with the government’s national plan would help provide certainty for the more than 18,000 Australians whose jobs rely on cruising. It would also allow the implementation of the extensive health protocols developed by cruise lines globally in response to Covid-19, and which are already operating where cruising has restarted overseas.

Australia is now the only major cruise market in the world where governments had yet to achieve progress on a framework for cruising’s resumption, and CLIA is urging the Australian government to agree plans in advance so that we’re ready as conditions improve with the rising vaccination rate.

Cruising involves long lead-times ahead of operations, so we need a plan in place now so we can work towards reviving an industry worth more than $5 billion a year to communities around Australia. 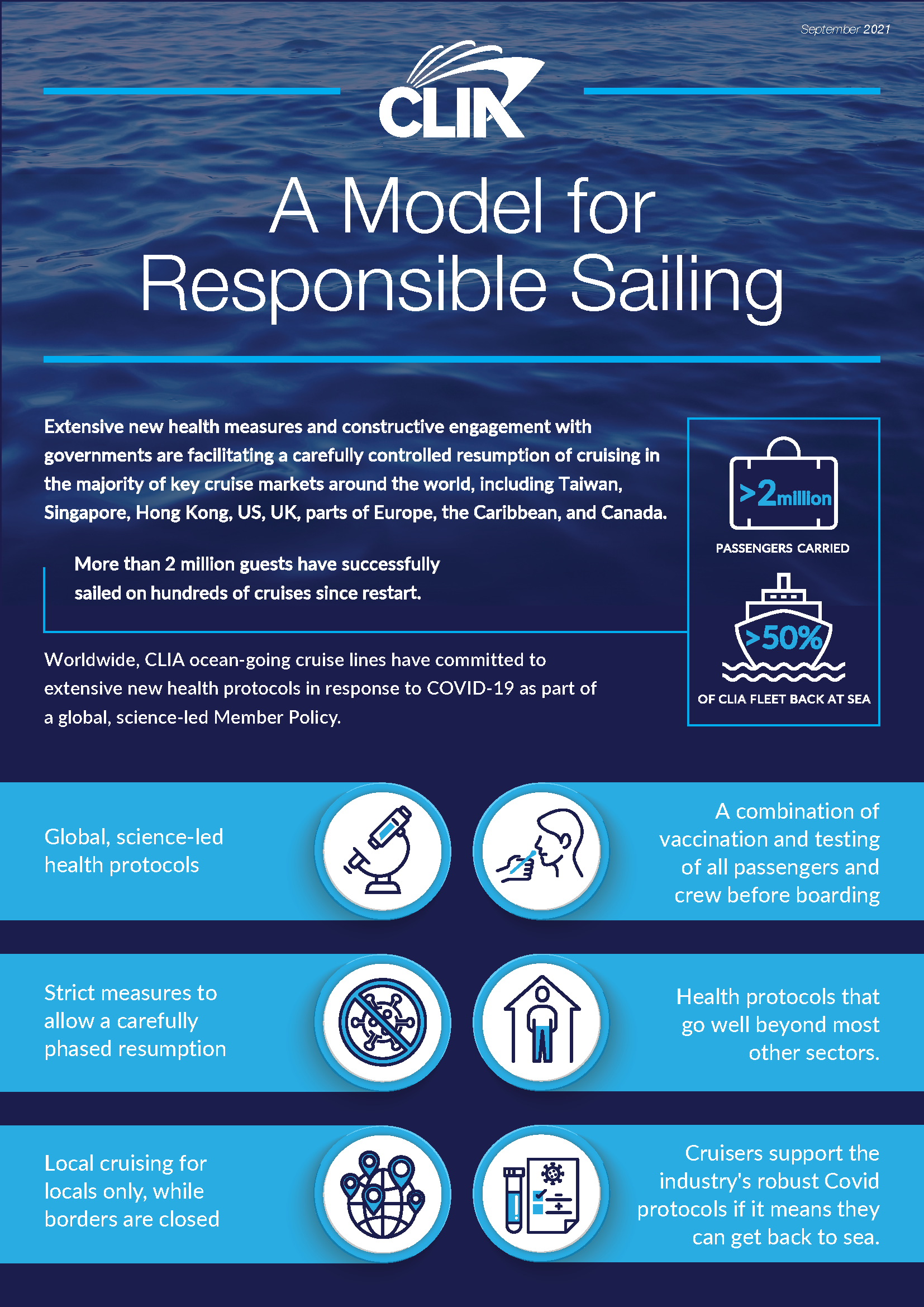 A Model for Responsible Sailing

With extensive new health measures allowing a tightly controlled resumption of cruise ship operations around the world, now is the time for our local industry to continue to rally together for the resumption of our own cruise operations.

We have created an infographic for you to share across your social media channels, your e-newsletters or to print and share with customers. Now, more than ever, we need you to raise your voice to support local cruise resumption.

A global response to COVID-19

Cruise lines globally have committed to extensive new health protocols in response to COVID-19. Developed with the help of leading medical experts internationally, these measures are among the most comprehensive to be found anywhere in the travel industry and are designed to uphold health and safety as the highest priority.

They include 100% testing of all passengers and crew – with a negative result required prior to boarding – as well as extensive protocols covering crew quarantine, distancing, sanitation, health monitoring and response procedures.

Importantly, they form a global CLIA policy covering every ocean-going member cruise line wherever they operate in the world. Find out more here.

The impact across Australia and New Zealand

More than $5 billion has been lost in Australia and New Zealand since cruising was suspended in March 2020, putting an estimated 25,000 local jobs in jeopardy.

These include thousands of workers in the many local businesses that help support cruise operations, such as travel agents, tour operators, farmers and food producers, beverage providers, transport companies, port workers and technical support providers.

CLIA's #WeAreCruise videos help tell the personal stories behind some of these Australian and New Zealand businesses as we work to achieve a responsible resumption of cruising with extensive new health measures in place.

View some of the recent media coverage here

Why can't we cruise?

With extensive new health protocols in place, CLIA is calling on Australian and New Zealand governments to agree upon a phased and carefully controlled resumption of domestic cruising.

A responsible pathway to resumption – similar to successful models already operating in parts of Europe and Asia – is essential to uphold health and safety while also protecting the jobs of more than 25,000 people across our region whose livelihoods depend on cruising.

Add your voice | How can I help? | Contact your member | Key messages | Social Media | Share your story

Add your voice to our message

Now is the time for governments to confirm a pathway towards cruising’s revival – one that upholds safety while supporting an economic revival in Australia and New Zealand.

CLIA is working closely with governments at many levels, but our efforts need your support.

Please add your voice and help us share the important work of our industry. Whether it’s by writing to your local or federal MP and other senior Ministers, posting to your social channels with the hashtag #WeAreCruise, or sending us your personal story to share with media - every voice counts.

How can I help?

There are many things you can do to show your support for our industry or share your story.  From Australia, use our easy Ready!Set!Sail tool at www.ReadySetSail.com.au to quickly send a personalised email to your MP's, or if you are in New Zealand, please use the helpful hints below to write to your local MP's.

Contact your Member of Parliament, and other senior Ministers

In Australia, use our easy Ready!Set!Sail tool at www.ReadySetSail.com.au to quickly send a personalised email or use the template and guide provided to email your State and Federal MP, and make sure they know about the impact of the suspension on your business and other businesses across Australia.

In New Zealand, use the template and guide provided to email your MP, and make sure they know about the impact of the suspension on your business and other businesses across NZ. Send copies to the Tourism Minister, Stuart Nash, and the Prime Minister, Jacinda Ardern.

The wider we can spread our message the better. Let them know about the work the industry is doing to underpin the resumption of operations, and your support for a phased, carefully managed restart of local cruises carrying locals only, while the international borders remain closed. Ask for their support for a phased, carefully managed resumption of local cruises to help the economic recovery of the thousands of businesses and jobs supported by the cruise industry.

Reinforce our key messages in all your communications and social media

Cruise ordinarily contributes more than $5 billion to the Australian and New Zealand economies, but tens of thousands of jobs are now at risk while cruise ships aren't operating.

Extensive new health measures developed with the help of international medical experts are laying the foundation for a carefully controlled resumption of local cruise ship operations in Australia and New Zealand.

CLIA is calling on governments to replace the current ban on cruising with a conditional process that would allow cruise lines to progress towards approval for a carefully managed resumption in 2021.

The success Australia and New Zealand have had in stemming community transmission of COVID-19 – together with the cruise industry’s robust strategy – create an opportunity for a tightly managed and phased revival of our $5 billion-a-year industry.

This would initially involve restricted local cruises for local residents only, with limited passenger numbers, 100% testing of guests and crew, and extensive screening and sanitation protocols in place.

Under proposals presented to governments by CLIA and cruise lines, cruises would initially operate within state or national borders while travel restrictions are in place. This would offer protective protocols against outside infection while at the same time allowing a revival of the economic benefits of cruise tourism in Australia.

Working with governments and health authorities, cruising can progress a responsible restart domestically within Australia and New Zealand, using ships and crew that have gone through all required quarantine procedures. Ships and crew would then remain within a safe-zone or bubble, offering cruising to locals only until international borders reopen.

The health measures cruise lines have committed to have been guided by eminent medical and scientific experts internationally and locally and cover almost every aspect of a cruise ship’s operations, including the specific screening, sanitisation and medical protocols that will operate in response to COVID-19.

This work has already supported initial resumptions in several jurisdictions around the world.

Tell us how you’ve been impacted

If you or your family has been affected by the cruise suspension, email us your story to wearecruise-aus@cruising.org and you may be featured on our social media pages or contacted to be involved in our campaign.

Some things to include in your email

Tell us your name and where you are from

Tell us about your business

How closely linked is your business to the cruise industry?

How much revenue have you lost since the cruise suspension began?

What other impacts has the suspension had on you, your business and your family?

What do you think needs to be done to get cruising happening again in your region?